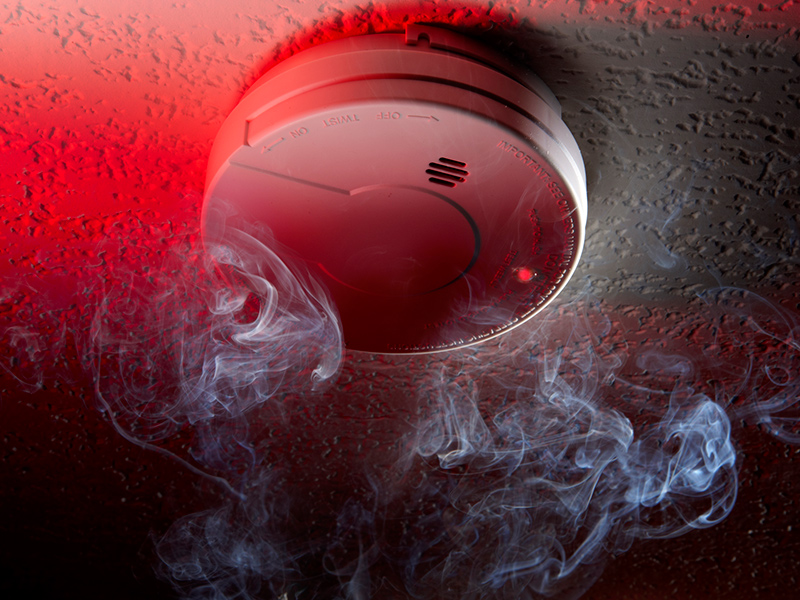 It’s 2:46 a.m. You’re drifting through a wonderful dream of a beautiful sunshiny day on the beach surrounded by friends. Laughter filling the air. A soft salty breeze kissing your skin. Cool waves dancing around your ankles. Fun. Relaxation. Pure joy.

Suddenly you awake. Coughing. Rasping. Grasping for every gulp of oxygen you can find. Room filled with smoke. Your bedroom door exit blocked by a flames. You can only hope your family at the other end of the house heard the fire alarm early enough to get out in time.

You grab your desk chair and swing it wildly at the window. Shatter! Glass everywhere. The flames morph into a blaze of fiery madness with the fresh taste of oxygen and charge towards you.

This image may be disturbing. Still, the question remains: Can you hear a fire alarm that may save your life?

Let’s explore what studies show about your ability to hear a fire alarm if you have mild, moderate or severe hearing loss.

Brief History of the Fire Alarm

Smoke detectors were first invented in the later 1960s but did not become a commonly used appliance until the 1970s. By the 1990s, deaths from fire-related disasters were cut nearly in half, down from 10,000 per year.

The National Fire Protection Association has stated that fire alarms should be credited with this dramatic drop in fatalities over the past several decades.

The not-for-profit group Fire Protection Research Foundation, or FPRF, offers helpful information on building and fire safety. In research conducted by the FPRF, it was revealed that the majority of the most commonly used fire alarm units were unsuccessful in waking millions of those with varying degrees of hearing impairment. The results of this study highlighted the crucial need for the redesigning of fire alarms and other emergency alerting units.

The FPRF 2007 research shows that the most successful way to rouse a slumbering person who struggles with significant hearing loss, is to use a noise that she/he can distinctly hear. It may seem as if higher frequency sounds would work best in these cases, but the opposite is actually true: Lower pitch sounds were substantially more successful than the higher pitch counterparts most often used in fire alarms. The results of the study are as follows:

Currently, there aren’t any low-pitch fire alarms available on the market. Which means we need to do two things, first, spread more awareness and encourage further research to ensure that every person is safely alerted when a fire strikes. And second, encourage people to protect their hearing whenever possible to increase their chances of hearing this life-saving device.